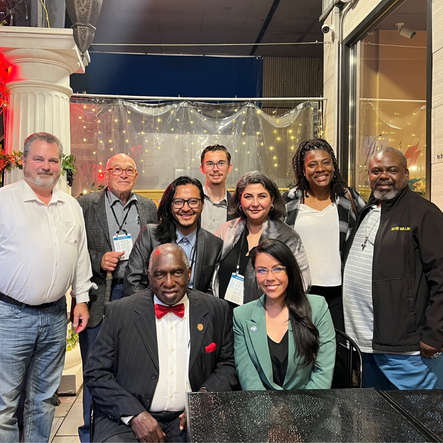 From September 19th-21st, I had the opportunity to attend the Eradicate Hate Global Summit 2022, in Pittsburgh, Pennsylvania along with a delegation from Utah including, Jay Jacobson of the antisemitism task force, Reverend France Davis of the Cavalry Baptist Church, Efren Garcia from the EDI office of Salt Lake County, Luna Banuri of the Muslim Civic League, Representative Sandra Hollins, Davis County Attorney Troy Rawlings, and Nubia Peña, the director of the Utah Division of Multicultural Affairs. Collectively, we learned from experts working to combat hate and extremism across the globe from different sectors and perspectives. The summit was started as a community response to the shooting at the Tree of Life Synagogue in Pittsburgh, to bring together experts with a focus on deliverables and finding opportunities for improvement that could be enacted or started before the next years summit. Our delegation from Utah represented the first delegation bring together leaders from different religious, ethnic, and racial groups in our community together to learn about the issues of hate and extremism to address them on the local level.

This year, the summit was divided into different track sessions focusing on Police and Military, Prevention in Practice, Legal Strategies, Education and Public Awareness, Community Preparedness and Response, Rise of Hate Among Young Adults, and Global Government Response. By bringing a larger delegation from Utah, we were able to split into different sessions that were more focused on the work that each person does and each night we met as our Utah delegation to compare notes. Through the summit, there were showings of the Not In Our Town Film: “Repairing the World: Stories from the Tree of Life”, that shows the greater Pittsburgh community coming together in the wake of the tragic shooting. Listening to political leaders, like Deborah Lipstadt, industry professionals at Meta and Twitter, etc., and nonprofit groups, media, and researchers all come together to address radicalization and hate was powerful and impactful. I found it especially fascinating to hear the stories of individuals who had been deradicalized from extremist groups and are now working to help others in their former situation to leave. A running theme through the summit, was the idea that fixing the entire issue of hate is too big for any one of us, it isn’t too big for all of us, which reminds me of Pirkei Avot that “you are not obligated to complete the work, but neither are you free to desist from it (2:21).”

Following the summit, the Utah delegation held a meeting at the state capital to report on the summit to a handful of state representatives to see what lessons from the Eradicate Hate Global Summit were most applicable in Utah and in which areas there is room for legislative action. Several of the key points from that meeting included sharing the sheer amount of available grant money to states and communities enacting established anti-extremism programming and to create new innovative programming and the issue of radicalization affecting our veteran community when they return home or retire from active service.

All the sessions from the summit were recorded are now available online on their website at: https://eradicatehatesummit.org