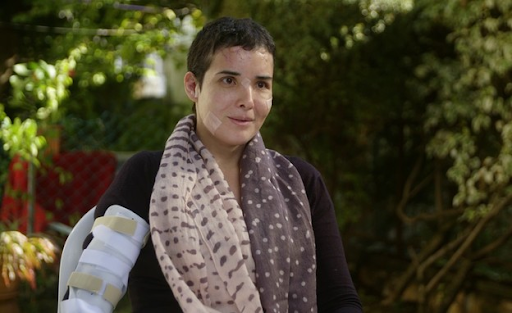 Shira and Yael - A Story of Strength and Courage

A few weeks ago a terrible story was published in the news in Israel. A woman from Mizpe Ramon was almost killed by her husband in front of their child. There are sadly too many of these stories of women getting beaten or murdered by their husbands since covid started. In 2020 alone, there were 20 women in Israel who died by the hand of their husbands.

You are probably wondering why I am telling you this terrible story.Well, it’s because this story ended differently than most like it for one reason. Shira Eiskov had a good neighbor! Her neighbor Yael heard her scream and even though she had her own little kid, decided to break into the house and see what was going on. What she found was worse than she expected. At that moment, she knew she had to make the decision to save Shira’s life. She called the first responders and started to give aid to Shira, which did help save her life.

Shira is in recovery now and her husband (who sadly in Israel will be her husband until he decides to give her a divorce and give her the Jewish divorce papers which are called a “get” in hebrew. But that’s a story for a different time) is now in jail. Shira understood how brave Yael was and that their story should be shared so she decided to do an interview with Israeli media. The way she appeared, with her shaved head, scars on her face, and with her missing teeth showed so much confidence and she was able to just be herself and talk.

Her bravery and willingness to share her story so that others could be helped or find a similar strength, was amazing.  And I just want to say, I have never seen anyone as beautiful as her in my life. She is so strong and so alive, she can do anything. She really can.

One good thing about people who live in Israel is that they don’t stay indifferent and so many were willing to offer their help to Shira so that she could start her life again. The main thing I want you to take away from this story is that we can’t be bystanders. We need to be like Yael who was willing to help. Not all stories are as horrible as this, but it is so important that each of us be good neighbors and good friends. We all need a little help. Especially in these times!