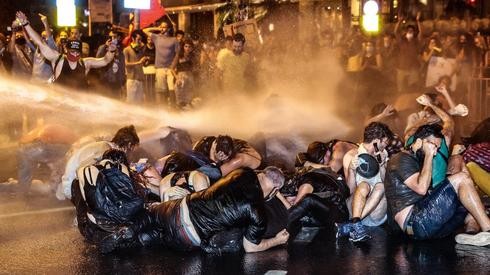 One Foot on the Platform, the Other on the Train….

These days are not simple ones for me. Not here in Utah, and not in Israel. I’m not sure you’re aware, but like in the United States, Israel is experiencing a lot of riots these days. They are about many things, like how the Government is dealing with Covid-19 or how the government is changing their budgets to move money away from the people. For example, two main programs have been cancelled since Covid. One is for the Youth Movements, and the other is “from madim to limudim” – which is a program that gives combat soldiers the funding to study in their first year of University for free.

Both of these budget cuts hit very close to home for me. The cuts to the Youth programs are what have my friends (and me if I were there) taking to the streets to protest. We all grew up taking part in Youth groups where we learned so many life skills and life lessons. I think we learned more in youth groups than in school. It was a place where we could feel comfortable sharing our problems. When I was old enough, I became a counselor in my group and learned what it meant to be leader and met so many of closest friends there. When we hear that the Government is reducing the budget for youth groups, we all want to stand up and fight to protect something that was so special to us.

The second program, “memadim lelimudim” is also such a difficult project to shut down. Young Israeli’s don’t go straight to University from High School, first we serve in the military. The soldiers that serve in the combat zones and who risk their life daily to save others, are given their first year of University free as a thank you for their service. This week the Government announced they will not be funding that anymore, even for those who are currently enrolled for this fall. This has been so important for so many and it really makes me angry to have it taken away.

I’d like to teach you a very famous Israeli term, “frayer”. “Frayer” means one who does things for other people and will always continue to be there for others, no matter what. Maybe the closest thing in English is the slang word, “sucker”. Now, for Israeli’s, the worst thing is to be a “frayer”. Once we feel like we’ve been taken advantage of, we get filled up with anger and frustration, and take to the streets in protest. Just like what’s been happening now.

I ask myself a lot of questions about “what kind of Israel will I be going back to?” It’s seems to have already changed so much since I left. Covid has changed it, budget cuts have changed it – and deep in my heart I want to fight for the place I love! You know what they say? Love doesn’t come easy.